Difference between revisions of "Teppo"

The introduction of the European matchlock began in 1545, during the appropriately named Sengoku period ("Period of the Country/Provinces at War"). At this time Japan had found a trading partner in the Europeans. Spaniard and Portuguese sailors who had sailed through Indian and Asian oceans had crash-landed on the small island of Tanegashima, in 1543. "While on this island the Portuguese had offered one of their matchlock rifles as a gift to the local lord"[1].

After that the Portuguese had begun to openly trade with other cities in Japan. Nagasaki had become a major trade port for trade between the Japanese and Portuguese, and the traders brought a variety of novelties including wool, velvet, tobacco, clocks and eyeglasses. But the most popular and less novel item brought to Japan by Europe, was the matchlock arquebus.

Many of the daimyô were impressed after seeing the European matchlock; by 1549 many daimyô ordered their weaponsmiths to copy and mass-produce this advanced weapon[2]. One daimyô in particular who saw potential in this weapon was Oda Nobunaga; he placed an order for 500 arquebuses, the largest order to date[3].

Soon the Japanese demonstrated not only their ability to quickly assimilate objects from other cultures, but also their ability to improve upon it. Many metalsmiths went to work and even improved the teppô. This weapon was found to be more powerful then the bow, and easier to use. Eventually the teppô replaced many archer units in battle[4].

A look at the Teppô

Manufacturing of this new firearm was simple; the barrel of the rifle was simple to create, simply by wrapping hot iron around a rod and force welding it shut made it, then fitting it into the stock of the gun. The gun’s firing mechanism was made from solid brass[5].

The Japanese teppo was not only easy to construct but also simple to operate. The gunner would simply hold the teppo straight using his shoulder as a brace. After opening the priming pan and pulling the trigger a spring would release the serpentine, which holds a lit fuse. As the burning fuse hit the priming pan full of powder, the matchlock would fire. Excess lengths of fuse could be wrapped around the stock of the gun or the gunner’s forearm[6].

Compared to the Japanese bow, the teppo had a more superior range. The matchlock had an effective killing range of 50 meters and a maximum range of 500 meters, compared to the bow, having a killing range of 30 meters and a maximum range of only 380 meters[7]. Ammunition for the teppo came in a variety of sizes, which was measured in weight instead of diameter[8]. Sizes ranged from as small as 1 monme (8.5mm) to as large as 100 monme (48mm, or nearly 2 inches in diameter). Many large caliber teppo (also known as “wall guns”) had large recoil, that bails of rice were used to support the gunners back. 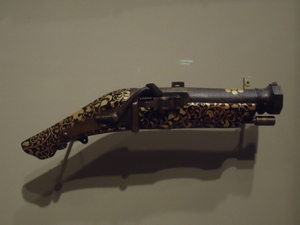 Although the teppo came in a variety of calibers, many daimyo standardized their teppo’s bores; this allowed for quick loading and allowed soldiers to use each other’s ammunition, when ammo became short[9]. A well-trained warrior could fire, at most, four shots per minute.[10]

Ammunition for the matchlock was made from casting solid lead. The lead that was being used for the ammunition was a major import from Europe. It was a suitable metal because of its malleability and high density[11].

Matchlock pistols were also produced in Japan, at least in the Edo period, if not earlier; these were rare in Europe. Intended for used by mounted warriors, they were called bajô zutsu , or "horsemen's cannon," but were in practice quite impractical. Nevertheless, they served their owners as status symbols.[12]

Firearms continued to be used by both samurai authorities and by peasants & commoners in the Edo period. Sakai and Kunitomo continued to be the chief sites of production, and matchlocks continued to be the dominant form of firearms used; firearms technology did not advance much within Japan over the course of the 17th to mid-19th centuries. Flintlocks, which had replaced the matchlock in Europe, were known and occasionally produced, but the matchlock remained dominant in Japan, possibly in part because they produced less recoil. These sorts of muskets were by far the most common form of firearm in the country, with some estimates claiming that roughly 150,000 to 200,000 firearms were in circulation at any given time in Tokugawa Japan. Peasants' weapons generally fired shot two to three monme in weight, equivalent to .440 to .495 caliber, in today's terminology. At the request of the shogunate, gunsmiths also on occasion produced handguns and small cannon.

David Howell argues that over the course of the period, within the countryside at least, firearms came to be seen less as weapons (i.e. for military purposes) and more as essential agricultural equipment. Peasants maintained possession of their guns after Toyotomi Hideyoshi's Sword Hunts in the 1580s-90s, which specifically targeted swords, and not firearms. It was only in 1657 that regulations on peasant ownership of weapons began to be put into place; even then, hunters, and farmers who claimed they needed guns to help defend themselves and their crops against wild boar and other such threats, were permitted to continue to own firearms. Physically identical weapons came to be divided into categories according to their use, with ryôshi teppô being used for hunting, and odoshi teppô being used for scaring away animals, i.e. for protection of people, homes, and crops. There was a third category, yôjin teppô, used for protection, that is, self-defense, against other people, but up until the Bakumatsu period, such licenses were only issued extremely rarely. Once licensed as being dedicated to one of these designated uses, a given weapon would continue to possess that identity, even as it was passed down through the generations, and would not generally be seen as something to be used for the other purpose. Amidst the numerous accounts of fist-fights and sword deaths in street brawls in Edo period Japan, there are no records of anyone using a firearm to shoot another person, in a street brawl or the like; guns were, however, used to sound signals or warnings.

Three months after the death of Shogun Tokugawa Tsunayoshi in 1709, whose reputation today continues to associate him with compassion policies for the protection of animals, gun policies changed somewhat, and farmers were permitted for the first time to employ live ammunition rather than blanks in scaring away animals. A series of edicts issued in the 1720s not only permitted the use of weapons by peasants year-round, but actually encouraged their use, and the borrowing of weapons, for the purposes of scaring away animals.

However, the use of firearms for this purpose, and their use in hunting, were still maintained as starkly different categories in the eyes of the authorities. Hunters hunted as their chief source of livelihood, and so for them guns were seen as necessities, and as symbols of their identity, and they were thus permitted to own guns outright. For farmers, however, guns were seen as something needed only temporarily, in those instances when threatened by animals, though in point of fact this "temporary" need might recur season after season, down through the generations. Farmers' guns, therefore, were generally not owned by the peasants, but were instead on loan from the authorities, at least nominally; in some cases, peasants physically borrowed the weapons from samurai, but in many cases, they kept the weapons, passing them on down the generations, though they were still nominally not seen as the property of the peasant household. Some guns were designated "two-season guns," to be used only at the height of the growing season, and to be, in theory at least, returned to the authorities during the rest of the year; other weapons were considered "four-season guns," though even these, in theory, were to be returned for a few days out of each year, and then re-borrowed if circumstances in the new year demanded it. Most likely, more often than not, guns were not physically returned and re-borrowed in this way, but were simply kept, as if on extended loan.

As a result of not officially owning the guns, peasants had to request formal permission to repair or replace broken weapons, as well as when transferring weapons, and their associated licenses (written on small wooden boards), to their heirs or to others. Shogunal authorities exercised relatively direct control in these matters initially, in the 17th century, but after the 1720s, in at least some regions of the archipelago, villages began to take greater control over such matters, authorizing their residents to make such repairs, replacements, and transfers of ownership.

In the early 19th century, the shogunate began to worry about the amorphous imagined threat of "bad guys" - including rônin, jobless commoners, and the like - hoarding weapons and planning violence or other criminal activities. Numerous edicts banned peasants from engaging in martial activities, including firing practice. Surveys uncovered a considerable number of "hidden" unregistered guns in peasant villages, most of them being kept in plain sight and (we might presume) used in a normal fashion, but simply not properly registered, as a result of the complexities of shogunal requirements on these matters. The shogunate thus gained a more solid, or accurate, impression of how many guns were in circulation, and confiscated many of them, reducing the number available to undesirable elements (as well as to upright citizens). Villagers took matters into their own hands, as well, setting booby traps and the like, and arming themselves against bandits and marauding gangs of rônin.

Firearms, used by peasants throughout most of the Edo period as equipment for hunting or protecting their land from animals, thus regained their identity as weapons by the 1840s or so. In the final years of the shogunate, the authorities began to muster groups of peasants already skilled with firearms and to use them as local patrols; some were even trained in the use of cannon. They were, at times, invited to simply take matters into their own hands, or implicitly deputized, to use their weapons to defend their communities against "bad guys"; organized peasant gun squads were also used to help suppress both samurai uprisings such as the Tengutô Uprising in 1864, and peasant uprisings such as the Bushû Uprising in 1866.

Similar developments occurred at the domainal level as well, within at least some of the han. Hiroshima han, for example, had enforced restrictions on peasant ownership of guns for most of the Edo period, but in 1863-1864, reversed those policies, encouraging peasants to arm themselves, and encouraging, too, a market for the trade in firearms within the domain. The aim was to employ the peasants to help defend the domain from both inland troubles and piracy or other sorts of maritime/coastal attacks coming from the Inland Sea.

For a few years, the Meiji government allowed peasants to continue to possess and use firearms for protecting their homes from animals. However, in 1876, strict regulations were put into place restricting private ownership of guns, which were now held chiefly only by members of the police force and conscript military.

Notes to the Text