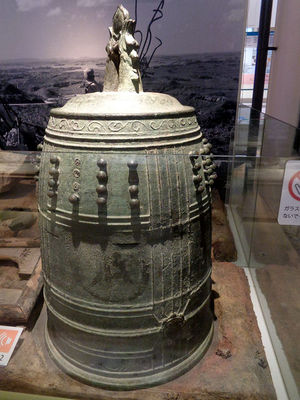 The bell from Tenryû-ji, today on display at the Okinawa Prefectural Museum

Tenryû-ji was a Rinzai Zen Buddhist temple on Okinawa Island, founded by the Japanese monk Kaiin in 1456.

One of the temple's main bells, also cast in 1456, was transferred to Okinawa's Tennô-ji when Tenryû-ji was dissolved. The bell was later moved to Ankokuzen-ji. In 1944, the bell was donated to be melted down to support the war effort, and was believed lost. However, it was later discovered intact at a temple in Tottori prefecture, and was returned to Okinawa in 1962.