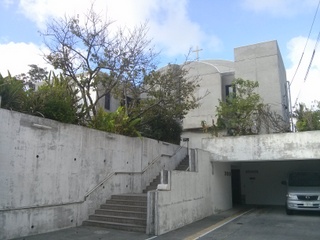 The Methodist Church which has stood on the former site of the Tennô-ji since 1933.

The temple is believed to have been founded around 1470, by King Shô En. Following the dissolution of the kingdom in 1879, Tennô-ji became the private temple of the Shô family, but it was sold off soon afterwards. The main building was relocated elsewhere, and re-established as a school, while the original location became in 1933 the site of a Methodist Church, which continues to operate on that site today. Sections of the temple's stone foundation walls are still visible along Ryûtan-dôri (the main avenue running through the Tônokura-chô neighborhood of Shuri).