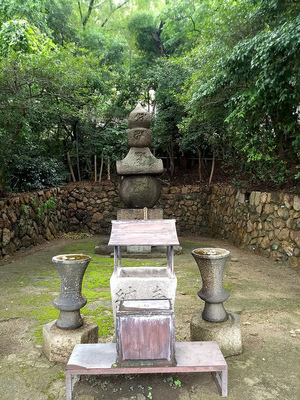 The grave of Atsumori at Suma, near Kobe.

Taira no Atsumori was a young Taira clan warrior who fought against the Minamoto clan in the Genpei War of 1180-1185. A son of Taira no Tsunemori, Master of the Palace Repairs Office, he is most known for the circumstances of his death at age 17 at the 1184 Battle of Ichi-no-Tani, as related in the "Death of Atsumori" chapter of the Tale of the Heike. This chapter has inspired numerous Noh, kabuki, and puppet plays, including Atsumori, Ikuta Atsumori, and Kumagai Jinya.

As related in the Tale of the Heike, Atsumori was making his way off the beach at Ichi-no-tani, towards a Taira ship waiting out in the water, when he was called back by a Minamoto warrior, Kumagai Naozane. Naozane rode up alongside him, grappling with him, pulling both of them off their mounts and to the ground. Tearing Atsumori's helmet from his head, Kumagai saw Atsumori's powdered face and blackened teeth - signs of courtly refinement & elevated status; noting that Atsumori was just the same age as his own son, Kumagai hesitated to kill him. Being given Kumagai's name, and realizing Kumagai was not of particularly high rank or status, Atsumori refused to give his own name, simply assuring Kumagai that he was a good kill, and that if Kumagai took his head, his superiors would recognize him as Atsumori. Declaring that he cannot let him go, because then some other Minamoto warrior will surely kill him, and that at least this way Atsumori will have a regretful Kumagai to say memorial prayers for him, Kumagai says he must take Atsumori's head - to which Atsumori replies, "Just take my head and be quick about it."[1] He then does so, distraught and weeping at having had to kill someone so young, innocent, and refined. Finding a flute among Atsumori's possessions, which he realizes must be the one he heard played so beautifully the night before, and which he later finds out was named Saeda, and was a gift from Retired Emperor Toba to Atsumori's grandfather Taira no Tadamori, Kumagai weeps again.

In the end, Atsumori is held up as of the chief examples in Japanese literature and legend of a tragic hero, and as the epitome of both bun (cultured refinement) and bu (martial skill & bravery). Though remembered for his youthful beauty and skill at the flute, suggesting a theme of how pitiful it was (is) that such youths and such cultured, skillful artists, should have to die in battle, in the text of the Heike chapter, Atsumori also proves himself as a warrior, bravely turning back to face Kumagai, boldly refusing to give his name to a warrior of lesser rank, and in the end saying "Just take my head and be quick about it."

Atsumori returns as a ghost in Zeami's warrior play Atsumori, in which Kumagai, who has now become a monk as a result of his deep regrets, helps him find release. This play, or a kôwakamai version of it, is said to have been one of Oda Nobunaga's favorite dances.

In the kabuki & puppet play Kumagai jinya, Kumagai cannot bring himself to kill Atsumori, and so he survives. In order to hide that he allowed Atsumori to escape, Kumagai kills his own son, presenting his own son's head to Minamoto no Yoritomo as Atsumori's.