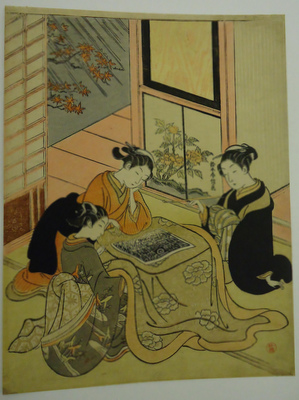 A nishiki-e print by Harunobu.

Suzuki Harunobu is one of the most famous and influential ukiyo-e artists. He is known chiefly as the inventor of the process for making full-color prints, which came to be called nishiki-e, and for his quite distinctive, and influential, style of portraying beautiful youths.

It is unclear who Harunobu may have studied under, though his style shows the strong influence of Nishimura Shigenaga and Nishikawa Sukenobu. He may have also had formal training under a Kanô school master. His early work, done in the late 1750s to early 1760s, reflects in particular the influence of the Torii school of ukiyo-e artists, who dominated the yakusha-e and bijinga modes.

Though Harunobu's nishiki-e would prove an exceptionally important development in the history of ukiyo-e, they derived originally from an obscure corner of the world of prints and popular culture. E-goyomi, or "calendar prints," did not explicitly display the months and days as a regular calendar would, but were single-sheet images which incorporated into their designs representations of which months in a given year would be the short months.

Harunobu was commissioned, beginning in 1765, by a poetry & prints appreciation circle headed by hatamoto Ôkubo Jinshirô, also known as Kyosen[1], to design such calendar prints for them. Unlike the cheap prints produced for the mass market, these commissioned calendar prints were created for a much smaller, and wealthier, audience, and so Harunobu was free to use far more expensive materials and methods. Catalpa wood was replaced with cherry wood for the woodblocks themselves, and more expensive colored inks were used. Harunobu also took advantage of the expanded budget to design prints with a greater number of colors, a process which required a greater number of blocks. The calendar prints he produced in 1765 and 1766 used better paper, thicker, more opaque colors, and would be reproduced for the mass market, marking a major shift in the way ukiyo-e prints were made, their quality, style, and appearance.

One of Harunobu's other great innovations, enabled by the advent of the full-color print, was the use of colored backgrounds. While some other artists had previously included some color in the backgrounds of their prints, most used either totally blank backgrounds, or some limited description of an actual setting. Harunobu was among the first to fill backgrounds with solid color, and the first to fill a background with black, or a dark color, to represent night; night scenes had previously been, and would continue to be in the vast majority of works, denoted simply by the presence of the moon, lanterns, candles, and the like, without any darkened background.

Lane summarizes Harunobu's vision as "idealistic but always focused on reality - the real as it should be but seldom is." Though Harunobu did produce quite a number of prints depicting courtesans and kabuki actors, his real focus was on the beauty to be found outside of those realms of fantasy, in the real world of everyday life.

He died in his 40s, at the peak of his career, leaving several disciples, including Harushige, who emulated the master's style so well that he passed off a number of his works as Harunobu's for years after the master's death. Though Harunobu's style and other innovations would prove quite influential, he did not have many followers or a direct school, and very few directly continued his style.