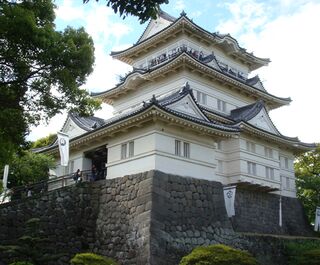 With the defeat of the Shimazu in 1587, the Hojo remained the only formidable force for Hideyoshi to reckon with. In the 7th month of 1589 Hideyoshi arbitrated a long-standing dispute between the Hojo and the Sanada clan of Ueda in Shinano concerning Numata castle and the Azuma Valley area in Kozuke province, giving most of the land to the Hojo, but leaving the Sanada the Azuma district and Nagurumi castle 名胡桃城 (north of Numata). However, in the 11th month, Hojo forces from Numata took over Nagurumi castle and killed the commander. Hideyoshi, proclaiming that the Hojo's actions were "unforgivable," declared war, and the next year he invaded the Kanto with an enormous army, spearheaded by Tokugawa Ieyasu. The Hojo, after some heated debate, opted to withdraw the bulk of their forces within the walls of their capital, Odawara - one of the most formidable castles in Japan at that time. There was little actual fighting, as the Hojo hoped that logistical difficulties would force Hideyoshi to call off his siege of their formidable Odawara stronghold. Hideyoshi, however, had made sure that his vast army was well-supplied, and after three months Odawara surrendered. Hojo Ujimasa commited suicide and the Hojo lost the Kanto.