Difference between revisions of "Sanjusangendo" 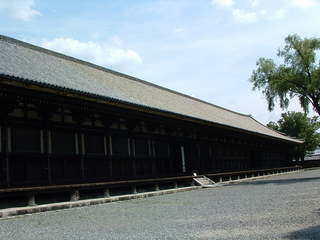 The Sanjûsangendô (lit. "Hall of 33 Bays") is a Buddhist temple of the Tendai sect located in Kyoto. It was built by Taira no Kiyomori for Ex-emperor Go-Shirakawa and finished in 1164 . It is thirty-three bays long (about 120 meters) and four bays deep, the width of "bays," i.e. the space between the pillars in a building, being standardized in traditional Japanese architecture.

Due to the great length of the hall, its exterior porch has long been the site of archery competitions. The competition centered not on hitting a bull's eye or other target with exceptional precision or accuracy, but rather on firing as many arrows as possible within a limited time, and on having as many of those arrows as possible fly the full length of the hall without striking the floor, walls, pillars, or ceiling of the porch. The standing record dates back to 1686, when a competitor is said to have loosed 13,053 arrows down the length of the building, of which 8,133 were successfully shot the full length of the building without touching it.

The hall contains a large gilded central sculpture of the "1000-armed" Kannon (the 1000 arms are represented by 42 arms in the statues), flanked by 1000 smaller 1000-armed Kannon, along with figures of twenty-eight other various Buddhist deities. The building, and many of the sculptures, were severely damaged during the Genpei War (1180-1185); the sculptures created in the early 13th century by Tankei and other members of the Kei school to replace those lost are often cited as some of the greatest surviving examples of Kamakura period sculpture.

An earthenwork wall in the Sanjûsangendô compound is counted among the Three [Great] Earthenwork Walls of Japan, alongside one built by Oda Nobunaga at Atsuta Shrine in Nagoya, and one at Nishinomiya Shrine.