Komatsu was the daughter of Honda Tadakatsu, one of the most trusted and prominent of Tokugawa Ieyasu's vassals. Ieyasu adopted her for use in marriage politics (a very common practice), and gave her the name of Komatsu. Thus she was officially Ieyasu's daughter. [1] He married her to Sanada Nobuyuki, the eldest son of Sanada Masayuki of Ueda Castle in Shinano province. They had two sons, Nobuyoshi (信吉), born 1593, and Nobumasa (信政).

Nobuyuki held the Sanada castle of Numata, in the NW corner of Kôzuke Province, and his family was living there in 1600 when in the prelude to the Battle of Sekigahara, Ieyasu summoned him, along with his father and younger brother Nobushige (Yukimura), to join in his attack on Uesugi Kagekatsu. They got as far as Inuyama in Shimotsuke province when they received an invitation from Ishida Mitsunari to join him against Ieyasu. Masayuki immediately withdrew from Ieyasu's army taking Nobushige with him, but Nobuyuki stayed with Ieyasu, it is said at his father's direction. Probably the fact that Komatsu was the daughter of Tadakatsu and also of Ieyasu played a part in Masayuki's decision to have Nobuyuki stay with Ieyasu. 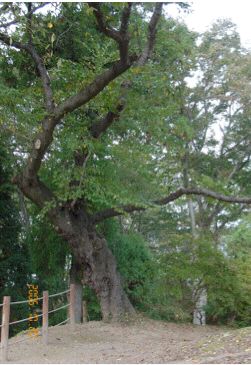 Cherry tree in Numata Castle from around 1600

Masayuki, having left Ieyasu, dropped by Numata on his way back to Ueda, announcing that he wanted to see his grandchildren. However, Komatsu refused him admittance, saying that even if she was a woman, she had been given the responsibility of guarding the castle, and if he tried to force his way in she would kill the children and herself and set the castle on fire!

Masayuki and Nobushige returned to Ueda and barricaded themselves in the castle, but soon after, a force led by Ieyasu's son Hidetada attacked (the Second Battle of Ueda Castle). Komatsu's husband Nobuyuki and his men were among the attackers. Of course, as part of the Sanada clan many of Nobuyuki's men had relatives in Ueda Castle and Komatsu apparently feared that some of them might betray her husband for their relatives' sake. She invited the aged parents and wives and children of the family retainers to the castle saying she wanted to entertain them during the difficult time while their husbands were away, and kept them there, virtually as hostages, during the attack on Ueda, which ended after eight days with Hidetada's withdrawal.

Ieyasu had promised to give Nobuyuki his father's land, and in 1601 it was turned over to him. He ruled both Ueda and Numata, but from 1616 concentrated on Ueda. Komatsu died on a journey in 1620 at Kônosu (鴻ノ巣), a stage on the Nakasendo Highway. Her body was taken back to Ueda.

Komatsu (Dairen-in) has splendid tomb markers ("haka") in temples in Ueda, Numata, and Matsushiro (where the family was transfered to in 1622). [2]