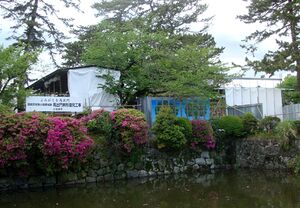 This article is a placeholder or stub. You can help SamuraiWiki by expanding it.
This article is a rough draft which is in need of cleanup (grammar, spelling, corrections, links, formatting, etc.). You can help SamuraiWiki by editing it. Click here for a list of articles that have been tagged as a draft copy.
Retrieved from "http://samurai-archives.com/w/index.php?title=Odawara_castle&oldid=42257"
Categories: