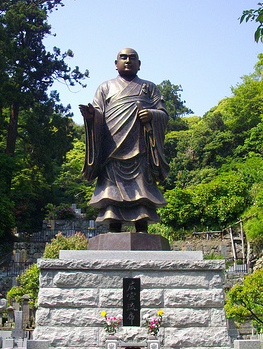 Statue of Nichiren at Myôhon-ji in Kamakura

Nichiren was the founder of the Buddhist sect by the same name.

Though born into a family of fishermen, Nichiren managed to become quite well-educated. Developing his own distinctive system of religious beliefs, centered on faith in the Lotus Sutra, and invocation of its name (the chanting of namu myôhô renge kyô), he traveled Japan preaching in public and gathering followers. The Nichiren sect was officially established in 1253.

Like Hônen and Shinran before him, Nichiren was exiled for a time for his beliefs. After his return from his exile to Sado Island, Nichiren spent time at Hongaku-ji, and other Kamakura temples, using them as his bases, from which he would go out to preach in the streets.

He asserted the supreme importance of the Lotus Sutra, and the danger to Japan if other sutras, and other modes of belief, continued to be practiced. The later years of his life coincided with the Mongol Invasions, and he and his followers credited their prayers with helping cause the kamikaze which defeated the Mongol fleets.

In 1282, Nichiren stayed at the villa of Ikegami Munenaka while attempting to recover from an illness; he died later that year, possibly at the villa, which was then established as a temple, the Ikegami Honmonji.

Nichiren's life is related in, among other works, a set of five handscroll paintings (emaki) known as the Nichiren Chûgasan.