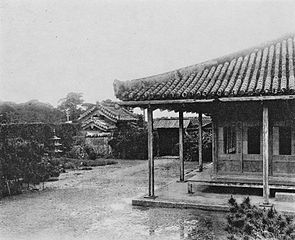 The mansion of the Crown Prince faced south. It was first built during the reign of King Shô Hô (1621-1640), and was located between the Shureimon and Chûzanmon just outside the royal castle grounds. The front areas of the mansion served as administrative spaces, while the Crown Prince's private quarters and other living spaces were further back. In the rear of the compound was the women's area of the house, an area known as the uchibaru. As in the uchibaru of Shuri castle, or the Ôoku of the shogun's palace, men were forbidden to enter this space, with the Crown Prince and a few others the only exceptions.[1]

Just before the fall of the Ryûkyû Kingdom, in 1873, the mansion was relocated to a site just a short distance away, on the north side of Ryûtan pond. The Prince and his family moved into the mansion at the new location in 1875. The new grounds, also totaling nearly 3000 tsubo, were divided between a complex of roughly twenty buildings in the eastern half of the grounds (covering roughly 2,000 tsubo or 6,600 square meters), and a comparatively empty, natural, area in the western portion of the grounds (an area covering roughly 700 tsubo or 2,240 square meters). A small hill or rise stood in this western portion of the grounds, with a small building known as the Ue no udun 上之御展 (two rooms of eight tatami each) atop it. An utaki, a sacred grove of the indigenous Ryukyuan religion, was located off to one side.[2]

Once Shuri castle was taken over by Japanese administrators & military after the fall of the kingdom in 1879, Nakagusuku udun became the primary royal residence for those members of the royal family who did not relocate to Tokyo.[1] Much of the kingdom's treasures were also moved to Nakagusuku udun, where they were cared for by a team of stewards.

As the war escalated in 1943-1944, numerous air-raid shelters were constructed on Okinawa and in locations throughout Japan; in case of an air raid, residents were supposed to bring their most prized possessions with them into the shelters. Due to wartime policies forbidding individuals from employing men aged 16 to 55 as domestic workers (in order to keep those men available for the war effort), however, the men watching over the mansion and the treasures stored there were mostly, if not entirely, on the older side and were unable to easily move all the family treasures to any other location. Furthermore, Japanese imperial military officer Major Nagano Hideo had commandeered a portion of the mansion for his own lodgings, making it even more difficult for the family's stewards to manage the space and its contents. Sakuma Seibun was the head chamberlain at this time, overseeing the mansion and its contents for Baron Shô Jun along with Hanagusuku Seian, Misato Anshi, Nakama Chôshin, and Tomigusuku Chôkô; they were some of the only people who had thorough knowledge of the family collection.[3]

In late March 1945, as the Allied invasion of the island approached (Allied forces made landfall on April 1), these stewards asked a young man named Maehira Bôkei for help in safeguarding the treasures. Bôkei (1921-2015) would later become a prominent scholar of Okinawan art and a leading activist for the return of royal treasures believed looted from the mansion. Believing that Major Nagano had a direct interest in protecting the mansion and would do so, and believing that various locations within the grounds would remain safe through the battle, stewards moved a number of items to the Ueno udun (a small building located on a rise in the western portion of the grounds, removed from the other buildings and hidden from the air by thick tree cover) and a number of other items into an underground drainage culvert which was partially built into a natural cave formation and connected to the mansion's air-raid shelter. A deep ditch running along a stone wall from the culvert to a well on the grounds was also used to hide a number of items.[2]

Three royal crowns were hidden inside the culvert, along with manuscript copies of the Omoro sôshi (a collection of mythohistorical poems; the oldest extant Okinawan writings) and of Chûzan seikan and Chûzan seifu (official histories of the kingdom), in protective boxes. The Ueno udun was filled with boxes and bags containing royal ceremonial costumes, implements and accoutrements for royal court rituals, brocades and other gifts from Chinese emperors, scrolls of painting and calligraphy by Chinese masters, and other items. A number of ceramic and porcelain pieces were buried in a hole dug in the northern portion of the grounds.[2]

Large-scale portraits of the kings of Ryûkyû (and of a number of crown princes) known as ugui were placed in the rafters of a temporary bathhouse constructed on the grounds by the Japanese military, while full sets of uzagaku and rojigaku musical instruments used in royal court ceremonies were moved to the Usubashiuja, a small building used by the attendants, where it was believed they could easily be moved again if necessary. Golden hairpins used by the king and queen, along with a number of other treasures made of precious metals and jewels, were kept in large safes; two such large safes were left in a staff building along with a third, smaller, medium-sized safe. Most remaining treasures were simply left in various locations within the mansion, as the stewards were unable to think of, or find, better places to secure them.[4]

The mansion was attacked by Allied forces in early April (on the 6th or 10th according to scholar Maehira Bôkei) and much of it was burned down. Stewards who had been hiding in the air-raid shelter or who escaped the fighting otherwise, were able to return to determine that the royal crowns and manuscripts hidden in the ditch were still safely there, the royal portraits were miraculously also safe despite the destruction of the bathhouse they were being kept in, and the safes holding the royal golden hairpins and other objects also survived the fire intact. The Ue no udun was also untouched. However, the stewards and other residents and staff were then forced by the Japanese military to evacuate the site entirely, leaving most of the treasures behind.[4]

Much of the island of Okinawa was ravaged over the next several months, with hard-fought land battles. It was the bloodiest battle of the Pacific War, and by some accounts more than one-third of the Okinawan civilian population lost their lives. After fighting ended in late June 1945 with the American capture of Shuri castle, many Okinawan civilians ended up in displaced persons camps for weeks or months before being able to return to their hometowns and villages. Scholar Maehira Bôkei, who was not officially a member of the Shô family staff but who had been invited by Chamberlain Sakuma Seibun to aid in securing the treasures, was thus not able to return to Nakagusuku udun for several months after it was burned down in early April of that year. When he finally did return in late August or early September, he reports that the safes had been forced open, their contents gone. Nothing remained in the ditch where the royal crowns and treasured manuscripts had been hidden. He returned to Nakagusuku udun on October 30 to find that though the Ue no udun was largely undamaged, the treasures stored there had been taken away. The hole dug in the northern part of the grounds, where a number of ceramics had been hidden, similarly appeared to have been undamaged by fire or shelling, but also had been dug open and all the treasures gone.[5]

A number of the looted items, including a large golden hairpin belonging to the Kikoe-ôgimi (chief priestess of the kingdom) and the manuscript copies of Omoro sôshi, Chûzan seikan, and Chûzan seifu, it was later discovered, were taken to the United States by a Commander Carl W. Sternfelt. Later that same year (1945), Sternfelt then showed the items to Langdon Warner, curator of East Asian art at the Harvard University Art Museums, and asked Warner to help him identify them. Warner sent Sternfelt a letter in December of that year explaining the importance of the items; though Sternfelt then held onto them for another eight years, in 1953, aware of their importance, he voluntarily surrendered the items to the US government. The US then formally returned the golden hairpin and manuscripts to Okinawa in a ceremony in May 1953 celebrating the 100th anniversary of Commodore Perry's first arrival in Okinawa and the opening at that time of a new Perry Memorial Museum in Occupied Okinawa.[5][6]

The royal crown which had been hidden in the ditch with the golden hairpin and manuscripts has not been seen since. An investiture crown held in the Shô family mansion in Tokyo at the time (and today in the collection of the Naha City Museum of History) is now widely believed to be the only such Ryukyuan royal crown extant, though Maehira Bôkei and others long believed the one lost from Nakagusuku udun may still survive, perhaps in a private collection in the United States. The royal portraits have also not been seen since; none are known to survive. The musical instruments, similarly, are not known to have survived; several sets of uzagaku instruments held by former daimyô families in Nagoya, Tsuwano, and Mito are the only kingdom-era sets known to survive.[7] Chamberlain Sakuma Seibun and the four stewards Hanagusuku, Misato, Nakama, and Tomigusuku all lost their lives in the Battle.[2]