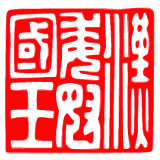 According to the Book of Later Han, in 57 CE, Emperor Guangwu of Han (China) granted Na an imperial seal, patterned after the Chinese jade seals, but made of gold. In return, that same year, Na sent envoys to the Chinese capital, offering tribute and formal New Year's greetings. This seal was discovered over 1500 years later, by an Edo period farmer on the island of Shikanoshima, thus helping to verify the existence of Na, which was otherwise known only from the ancient chronicles. Engraved upon it are the characters 「漢委奴国王」(kan no wa no na no koku-ō, King of the Japanese country of Na of Han).