From SamuraiWiki
Revision as of 11:15, 2 October 2017 by LordAmeth (talk | contribs) (I'm not sure what the "sic" was for, but she did marry Toshitsune at age 2.)
(diff) ← Older revision | Latest revision (diff) | Newer revision → (diff)
Jump to navigationJump to search 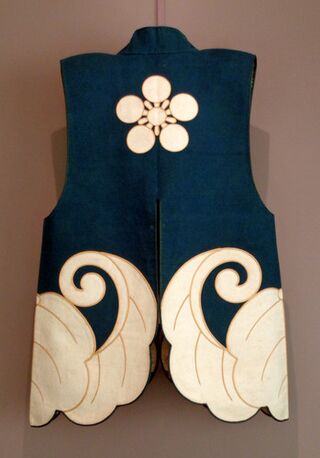 The origins of the Maeda clan is not known, though in Toshiie's time it was said they descended from Sugawara Michizane, hence the plum-blossom family crest. However, historically they came from the village of Arako (now in Nagoya City) in Owari province.

Maeda Toshiie served Oda Nobunaga, fighting under Nobunaga's general Shibata Katsuie in the Hokuriku, and was given land in Echizen province, then in Noto province. After surrendering to Hideyoshi in 1583 he was given land in Kaga province that included Kanazawa. Kanazawa was to the the seat of the clan for almost 300 years. In 1585 he was also given land in Etchû province.

Toshiie's son Toshinaga sided with Tokugawa Ieyasu during the Sekigahara campaign and received the areas of Kaga that he did not have already. Thus, during the Edo period the Maeda clan ruled the three provinces of Kaga, Noto, and Etchû, which meant that their kokudaka was over one million koku (百万石), the largest among the daimyô. When Maeda Toshitsune retired he established branch houses through two of his younger sons and created sub-fiefs for them--Daishôji 大聖寺 (70,000 koku) in Kaga and Toyama 富山 (100,000 koku) in Etchû. These fiefs continued thus until the Meiji Restoration.

The Maeda clan was a tozama clan, but it was considered close to the shogunate, and the head was entitled to use the name "Matsudaira," the name of Tokugawa branch families, ceremonially.

The following link has digital copies and partial transcriptions of several lists of samurai of the Maeda clan (加賀藩の侍帳） http://www.library.pref.ishikawa.jp/toshokan/dglib/samurai/