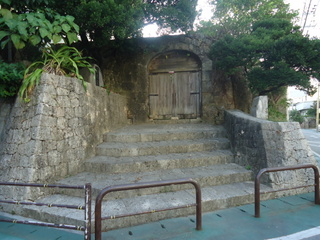 The surviving stone gate to the Kami Tenpi-gû.

Kumemura, the Ryûkyû Kingdom's center of Chinese learning, had two shrines to Tenpi (aka Mazu), a Taoist goddess of the sea. The two shrines, called Upper (Kami) and Lower (Shimo) Tenpi-gû, are believed to have been built during the reign of the Yongle Emperor, in 1424,[1] within the first decades after the establishment of the town. Their first objects of worship, statues of the goddess, are said to have been brought to Ryûkyû by the original 36 Min families who founded Kumemura.[2]

Ryukyuan sailors prayed to Tenpi for safe travels at sea, often carrying statues of the goddess onboard their ships, and offering the statues to the shrine upon their safe return.

One of the shrine's bells dated to 1456, during the reign of King Shô Taikyû. The inscription indicates that two magistrates named Yonafuku and Nakanishi were responsible for its construction.[3]

The Upper Shrine was the center of elite education in the kingdom until the establishment in 1718 of the Meirindô at the Shiseibyô.[4] The stone gate of Kami Tenpi Shrine survives today, attached to the Tenpi Elementary School built on the former site of the shrine. The construction style of the gate indicates a transition at that time (in the early 15th century) from the aikata-zumi style of stone construction to the nuno-zumi style.

The grounds of the Lower Shrine, along with the neighboring offices of the Naha satonushi, became the site of the first Okinawa Elementary Normal School in 1880/6, and later the Prefectural Normal School, and then in 1886 a post office. The objects of worship from the Lower Shrine were first moved to the Upper Shrine, but when Tenpi Elementary School was established on the grounds of the Upper Shrine in 1889, the images of Tenpi which had been the objects of worship at both shrines were moved to the Tensonbyô, a different Taoist shrine in the area, which was later incorporated into the Shiseibyô, Kumemura's Confucian Shrine.[5]