Difference between revisions of "Hotta Masatsune" 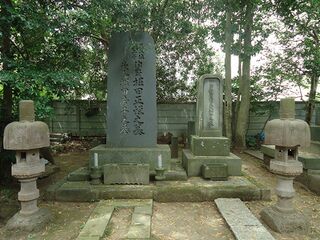 The graves of Masatsune and his wives Hideko and Kazuko, at the Hotta clan cemetery at Jindai-ji, in Sakura

Hotta Masatsune was a prominent politician of the Taishô and Shôwa periods.

Born into the Nabeshima clan in the Azabu neighborhood of Tokyo, the son of Nabeshima Naotô, Masatsune was adopted by Hotta Masatomo, the last Edo period lord of Sakura han. He graduated from Tokyo Imperial University in 1915, completed a graduate degree there in 1918, and that same year, became a member of the House of Peers, with the title of Hakushaku. He became a councilor in the Ministry of the Navy, and served as parliamentary Navy vice-minister in the cabinets of Prime Ministers Inukai Tsuyoshi, Saitô Makoto, and Okada Keisuke in 1930s, and served in the House of Peers until its abolition in 1946.

He is buried in the Hotta clan cemetery at Jindai-ji, in Sakura, Chiba prefecture, alongside his wives Hideko and Kazuko.