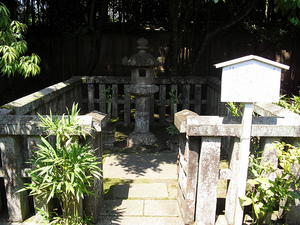 A stone lantern marking the grave of Hosokawa Gracia and her husband Hosokawa Tadaoki, at Kôtô-in, a subtemple of Daitoku-ji, in Kyoto.

Hosokawa Gracia was the wife of daimyô Hosokawa Tadaoki (Sansai), and is famous as a prominent Christian convert of the late Sengoku period.

She was born in 1563, the third daughter of Akechi Mitsuhide and Fuseya (daughter of Tsumaki Norihiro).

Tama was married to Hosokawa Tadaoki in 1578, when they were both 15 years old. The couple lived at the temple Seiryû-ji for a time, before Tadaoki was made lord of Tanabe castle. There, Tama gave birth to their first daughter in 1579, and a son the following year.

After her father killed Oda Nobunaga in the 1582 Honnô-ji Incident, Tama's mother and brother were also killed (or committed suicide). Tama was not killed, but was divorced, and was for a time confined in a remote mountain village by Tadaoki. She was taken back by her husband two years later, in 1584, thanks to the intervention of Hashiba (Toyotomi) Hideyoshi. According to tradition, Gracia was introduced to Christianity by Takayama Ukon, and pursued it while Tadaoki was away fighting in Korea (1592-93, 1597-98), eventually being baptized. In 1600 she was left in Osaka castle by her husband as one of a number of wives to act as hostages by notable Tokugawa loyalists. Soon afterwards, Ishida Mitsunari attempted to seize the women to influence their husbands, and in the attempt Gracia was killed - either on her orders or those of her husband.