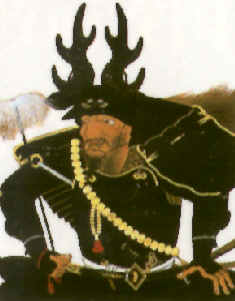 Honda Tadakatsu served Tokugawa Ieyasu all his life, and fought in nearly all of his battles. Tadakatsu first served Ieyasu as a page and later as a first-rate warrior. He led troops in the second rank of Ieyasu's army at Anegawa, where the Oda and Tokugawa fought the Asai and Asakura. In the actions immediately preceding theBattle of Mikatagahara (1572), troops under Honda (along with Okubo Tadayo) made contact with the advancing Takeda army and were able to escape due to Tadakatsu's skillful leadership. In the actual struggle at Mikatagahara, Tadakatsu commanded troops in the left wing of Ieyasu's army and fought with the warriors of Naito Masatoyo.

Three years later (1575) he commanded a rank of riflemen at the Battle of Nagashino [see Takeda Katsuyori]. His finest moment came in the Komaki Campaign (1584). Left with at Komaki while Ieyasu departed to engage Toyotomi troops at Nagakute, Tadakatsu observed a huge host under Hideyoshi himself move out in pursuit. With a handful of men, Tadakatsu rode out and challenged the Toyotomi army from the opposite bank of the Shonai River. Toyotomi Hideyoshi (who outnumbered Honda perhaps 50 or 60 to 1) was said to have been struck by the bravery of this warrior, and ordered that no harm come to him, his men, or Ishikawa Yasumichi, who accompanied him on this bid to buy time for Ieyasu.

In 1586 Honda accompanied Ieyasu on a trip to Kyoto and was given the title Nakatsukasa-taiyu. Honda accompanied Ieyasu in the Siege of Odawara and joined him at Hideyoshi's Korean Invasion headquarters on Kyushu (Nagoya, 1593-94). In [[1590] he received a fief in large Kazusa (Otaki, 100,000 koku). Tadakatsu commanded troops at the Battle of Sekigahara (1600) and afterwards was given a rich fief in Izu (Kuwana, 150,000 koku). He passed away in 1610, considered one of Ieyasu's most loyal retainers and perhaps his toughest general. He was easily recognizable on the battlefield by his famous helmet, which was adorned with deer antlers. He was followed in service to the Tokugawa by his sons Tadamasa (1575-1638) and Tadatomo (1582-1615) (both of whom would serve in the Osaka Campaigns (1614,1615).