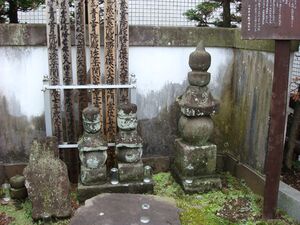 Grave stones of Ujimasa, his wife, and Ujiteru near Odawara station

Ujimasa was the eldest son of Hôjô Ujiyasu and is considered the fourth head of the Hôjô clan. He officially assumed leadership of the Hôjô in 1560, but followed most of his father's advice until the latter died in 1571. He fought in most of Ujiyasu's latter campaigns, and while not a great warrior, Ujimasa showed himself a capable administrator. One of his first acts was to improve relations up with the Takeda, with whom the Hôjô were at war with in 1570. This angered Uesugi Kenshin, who proceeded to raid the Hôjô's northern holdings. In 1572 Ujimasa dispatched 2,000 troops to assist Takeda Shingen in a campaign against Tokugawa Ieyasu and after Shingen's death (1573) offered to act as a mediator between his heir Katsuyori and Oda Nobunaga.

In 1578 Kenshin died, and Uesugi Kagetora, Ujimasa's brother (earlier adopted by Kenshin), was an heir apparent to the Uesugi house. He became involved in a bitter feud with Uesugi Kagekatsu, which severely weakened the Uesugi house. Kagetora was forced to commit suicide before Hojo troops could arrive to help, but the struggle had all but ended the Uesugi threat to the Hôjô domain. In addition, the Takeda had been devastated in their defeat at Nagashino (1575), leaving Ujimasa to consolidate the Hôjô's domain without further outside interference.

The same year Uesugi Kagekatsu came to power (1578) Takeda Katsuyori made an alliance with the Uesugi. This nullified the Takeda-Hôjô peace treaty of seven years standing and Ujimasa and Katsuyori immediately began fighting. In 1580 their war culminated in the Battle of Omosu, a largely inconclusive affair conducted both on land and at sea around Izu province. Fighting between the two families continued sporadically until Oda Nobunaga and Tokugawa Ieyasu launched a massive invasion of Kai and Shinano in 1582. Hôjô contributed to the destruction of the Takeda but may have regretted Katsuyori's fall, for it now meant that a much more dangerous foe bordered the Kanto - Oda Nobunaga. Relations between the Oda and Hôjô were tense-especially when Takigawa Kazumasu began moving into Kozuke. After Nobunaga's death in June 1582, Ujimasa gathered an army and attacked Takigawa, defeating him at the Battle of Kanagawa. Meanwhile, Tokugawa Ieyasu seized Kai and Shinano-prompting Ujimasa by way of protest to bring his army to Kai. Ieyasu and Ujimasa skirmished briefly before agreeing to a truce, the result of which was that the Hôjô received land in Kai and Hôjô Ujinao married one of Tokugawa's daughters. When Tokugawa clashed with Toyotomi Hideyoshi in 1584 (The Komaki Campaign), the Hôjô remained neutral.

By 1588 Toyotomi Hideyoshi had expanded his domain from the Tokugawa's lands to Kyushu, and sent requests to the Hôjô that they visit him in the capital. Prior to this, Ujimasa had officially retired in favor of his son Ujinao but essentially ruled alongside his son. The Hôjô response to Hideyoshi's 'requests' was to ignore them. Perhaps lulled by their alliance with the Tokugawa and by their own defensive array (which included the Hakone Mountains), Ujimasa and Ujinao waffled. Negotiations continued fruitlessly into 1590, at which point Hideyoshi ordered the military conquest of the Hôjô domain. In May Toyotomi forces began to descend on the Kanto-including Tokugawa Ieyasu, who advanced eastward through the Hakone passes. Uesugi Kagekatsu and Maeda Toshiie marched into Kozuke and the Chosokabe, Wakizaka, Kato, and a collection of other naval-borne samurai contingents threw up a naval blockade off Odawara.

The Hôjô were torn on a course of action. Ujinao was inclined to risk his 50,000 warriors all in a field battle, but the sheer magnitude of the enemy armies allowed his father and retainers to talk him into adopting a purely defensive posture. Most of the Hôjô's forces were drawn within Odawara's walls, leaving the chain of forts that acted as satellites to the main castle to fall one after another. By June some 200,000 troops were arrayed around Odawara, and the rest of the Kanto was largely in Hideyoshi's hands. It is probable that Ujimasa hoped a prolonged siege would prove too much to bear logistically for the Toyotomi forces-in much the same way that earlier attempts by the Takeda and Uesugi to besiege Odawara had failed for lack of supplies. The Hôjô themselves had an immense reserve of food-stuffs and ammunition. Unfortunately for Ujimasa and Ujinao, Hideyoshi had a brilliantly organized logistical train and all the time in the world on his side. Markets, theaters, and tournaments popped up in the Toyotomi camp, creating an almost peacetime flavor to this, the last and greatest of Hideyoshi's campaigns in Japan. Within Odawara, endless debate continued (to the extent that even today, a long, drawn-out debate or meeting that yields no results is called an 'Odawara conference'.) even as the weeks turned into months. In July, Hideyoshi demanded Odawara surrender, and Hôjô Ujinori (Ujimasa's brother) was sent by the Toyotomi to urge a peaceful end to the siege. To this point, there had been little actual fighting, save a few skirmishes seemingly designed to break up the monotony of the affair more than anything. An all-out assault promised to be a bloodbath for both sides.

To the end, it would appear that Ujimasa, despite a growing danger of treason within the castle walls and faltering supplies, was determined to resist. Ujinao, however, was not so inclined, and finally agreed to surrender in early August. The Hôjô garrison was spared, but Ujimasa and his brother Ujiteru were made to commit suicide. Their graves, today just a short walk from Odawara Station, are said to have been placed atop the same stone where the two brothers performed their seppuku. The graves were fixed up by the Inaba clan in the 17th century, and though damaged in the Great Kantô Earthquake of 1923, were repaired again the following year.[1]