Difference between revisions of "Hiroshima han" 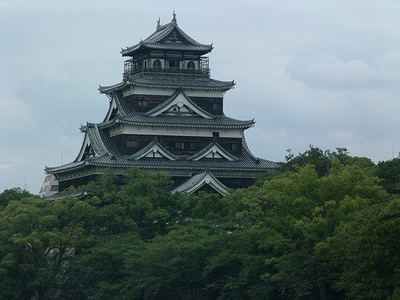 The main keep of Hiroshima castle.

Hiroshima han was established with Fukushima Masanori as its daimyō (feudal lord), following the battle of Sekigahara and the expulsion of Môri Terumoto, the previous lord, from the territory. However, nineteen years later, Hiroshima castle suffered extensive flood damage and Fukushima repaired it in violation of the Tokugawa shogunate's laws on the construction and repair of castles (see buke shohatto). The shogunate then ordered Fukushima to Kawanakajima han, and awarded Hiroshima to the Asano clan, who ruled it for the remainder of the Edo period, the domain being dismantled along with all the others in 1871. As the rulers of the entirety of Aki province, the Asano were considered hon-kunimochi ("true country holder") daimyô.[1]

In 1863, the lords of Hiroshima dispatched Miyata Gonzaburô to Kagoshima, where he negotiated with the lord of Satsuma han for Satsuma to lend Hiroshima some 100,000 ryô, for purchasing warships. Hiroshima would pay back this loan with annual payments of 10,000 koku of rice, plus eight shu in precious metals, to be handed over in the Hiroshima domain port town of Mitarai. In actual practice, the payments ended up being in not only rice, but accompanied by some amount of copper or bronze, iron or steel, and spun cotton thread. This constituted secret trade, in violation of shogunate policy, but seems to have gone on quite smoothly and successfully nevertheless.[2]