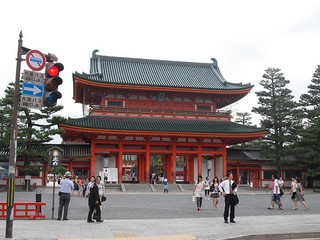 The shrine was established in 1895, in honor of the 1100th anniversary of Emperor Kammu establishing Kyoto (aka Heian) as the imperial capital in 794. Originally enshrining only Emperor Kammu, the shrine came to include Emperor Kômei as well in 1940.[1]

The main buildings of the shrine are meant to resemble or recreate those of the Heian Imperial Palace, and within the context of national discursive efforts to preserve & present Kyoto as something of a museumpiece showcasing the nation's ancient and grand Imperial traditions, historian Takashi Fujitani describes the shrine as "a model within a model, a reproduction of an imperial court within Japan's exemplary imperial city."[2] The shrine was granted the highest ranking, kanpei taisha, by the Meiji government, and is designed to recreate the Chôdôin, the core sections of the larger Heian Imperial Palace (daidairi), as it might have looked at the founding of Heian-kyô at the end of the 8th century. The main gate of the shrine reproduces the palace's Ôtemmon, while the two towers to either side reproduce the White Tiger Tower (Byakko-rô) and Blue Dragon Tower (Sôryû-rô), and the main building of the shrine is designed to resemble the Daigokuden, the Great Audience Hall of the Heian palace.[2]