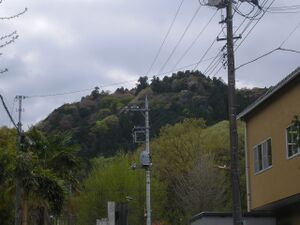 Shiroyama seen from the east

Hachioji Castle was located on Mt. Fukazawa 深沢山 [1] near Kobosatsu Pass 小仏峠, the place where Kôshu Kaidô, a highway to Kai province, enters the Kantô Plain. It was built by the Hôjôs of Odawara castle, the dominant family of the Kantô at that time. It was overwhelmed and destroyed during Hideyoshi's siege of Odawara.

The castle was built as an outpost of Odawara Castle by Hôjô Ujiteru, the younger brother of Hôjô Ujimasa. In 1569 Takeda Shingen of Kai had passed through the Kôshû highway to attack Takiyama castle 滝山城, located near where the Akikawa River flows into the Tama River. According to some sources, Hachioji Castle was begun soon after, but perhaps only some basic fortifications were made, as other sources give various dates in the 1580s. The Hôjô were allied with the Takeda from 1560-68 and again from 1571-78,[2] so perhaps they put off serious building to avoid upsetting the alliance. 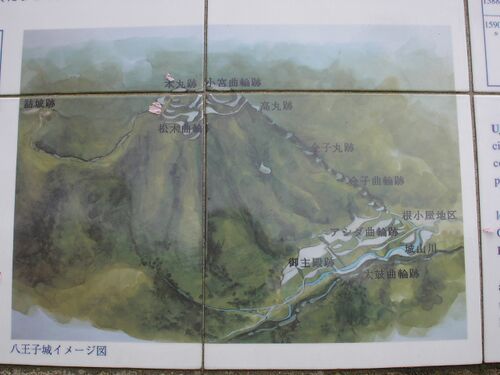 Diagram of the castle as it was in the 16th century, viewed from the south. The approach was from the right. The residential area was at the bottom right. The Hon-maru was at the top of the mountain, with the Matsuki Circuit 松木曲輪 just below it.

The main approach to the castle was from the east. At the bottom of the mountain were the residential buildings, the main one furthest in. It was approached by two bridges over the river, which could be cut down in case of need. The honmaru was on the top of the steep 445-meter mountain. The approach was protected by many circuits (magewa). To the west the ridge led to some other castles. 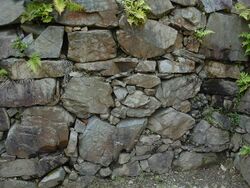 Original stonework near the residential entrance

In 1580 the Hôjôs visited Oda Nobunaga in Azuchi castle, and it is believed that this visit influenced the building of Hachiôji castle and the main residential building was made as splendid as possible. Some pieces of Chinese pottery and even some Venitian lace glass, unique from that period in Japan, have been found on the site. 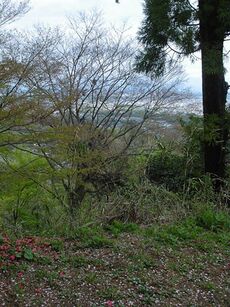 In 1590 Hideyoshi launched his invasion of the Kantô and besieged Odawara Castle. He did not attack Odawara itself, but rather the other Hôjô castles, one after another. The battle of Hachioji Castle lasted only one day, but it was very fierce. On 1590/6/23, Maeda Toshiie attacked from the front (Ote) and Uesugi Kagekatsu from the rear (karamete). At that time Ujiteru was in Odawara, so the budren of defence fell on Yokochi Kenmotsu 横地監物, Nakayama Kageyu Ienori 中山勘解由家範,[3] etc. They fought hard, but finally fell, overwhelmed. The soldiers and family members in the residential area killed themselves, either by the sword or by throwing themselves over the near-by waterfall. The battle is described in the 新編武蔵国風土記稿 and 武藏名勝図絵. Hideyoshi took the prisoners to Odawara castle to prove that he had captured it. Odawara Castle surrendered on 7/11. Ieyasu, who was given the land, did not use the castle, and it fell into ruin.