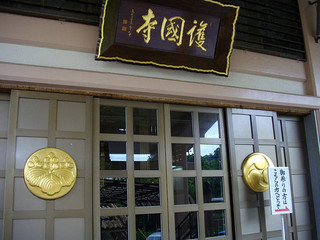 Front doors to the main worship hall at Gokoku-ji. 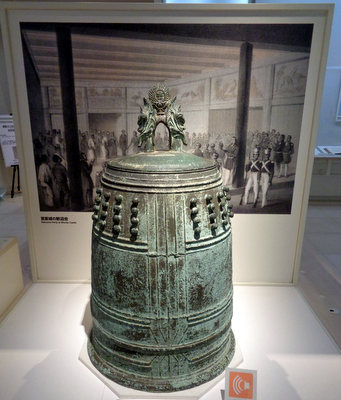 The Gokoku-ji bell, on display at the Okinawa Prefectural Museum

Not to be confused with Gokoku Shrine, located elsewhere in Naha.

Gokoku-ji (lit. "Protection of the Nation Temple") is a Shingon temple in Naha, Okinawa, founded in 1367 by the Japanese monk Raijû Hôin. The temple, located adjacent to Naminoue Shrine was a major religious site for both the native Okinawan kingdoms, and the current Okinawa Prefecture.

The temple was taken over from 1846-1853 by Protestant missionary Bernard Bettelheim, who kicked out the monks, and removed much of the objects of worship and other religious objects from the temple.

Gokoku-ji's temple bell was given by the regent to Commodore Matthew Perry in 1853 as a gift from the kingdom. The bell, cast in 1465, was for many years kept at the US Naval Academy at Annapolis, and rung when the Navy defeated the US Army in football. It was returned to Okinawa in 1987; a replica hangs at Annapolis today. Another replica hangs at the University of the Ryukyus, while the original is today housed at the Okinawa Prefectural Museum.

The temple was rebuilt following World War II. The facade of the main worship hall today bears a pair of large golden seals - one, the royal seal of the Ryukyuan royal Shô dynasty, and the other, the seal of the Government of Japan. A monument to Bettelheim was erected in 1926.