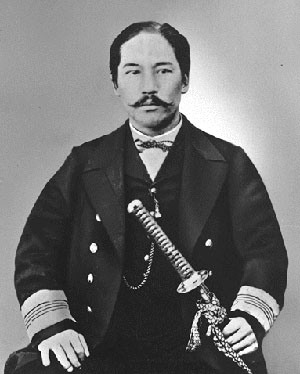 Enomoto was born as a son of Gokenin. After 6 years of studying in the Netherland, he returned to Japan and became vice president of the Shogunate Navy.

1868/4/11, When Edo castle surrendered to the Imperial troops, Enomoto and Bakufu loyalists escaped Edo with 8 fleets and headed to North.

10/25, they occupied Goryôkaku fort in Hakodate. 1869/1, Enomoto was elected to be the president of so-called "Ezo Republic". The republic lasted only 5 months. 1869/5/17, Goryôkaku surrendered to the Imperial troops.

Enomoto spent 2 years in a jail. The Meiji government needed Enomoto who was educated in Europe and had knowledge of the International laws. Enomoto was first hired to the Ezo Development Commission and later became Minister communication and Minister of Education.

This article is a placeholder or stub. You can help SamuraiWiki by expanding it.
Retrieved from "http://samurai-archives.com/w/index.php?title=Enomoto_Takeaki&oldid=17576"
Categories: