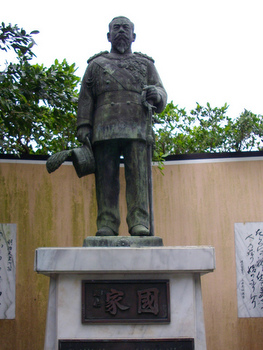 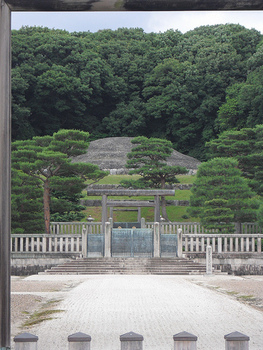 Among the many other significant events of his reign, the emperor received numerous foreign heads of state, royals, and other dignitaries who came to Japan on formal and informal visits, including US President Ulysses S. Grant, King Kalakaua of Hawaii, Tsarevitch Nicholas II of Russia, and a number of British royals, among others. The emperor never learned to speak any English, and is said to have never been able to relax in conversation with foreigners, showing little personality and instead playing the part of Imperial host.[1]

By 1871, however, the emperor declared in an imperial rescript a reform of court dress, on the basis that the traditional modes "gave the impression of weakness." Indeed, Satow's account describes the emperor as "bashful or timid," and as needing "to be assisted."[2] The second of his official portrait photographs, taken by the same Uchida Kuichi in 1873, shows a dramatic transformation. In this, another of the most famous and most widely familiar images of the Meiji Emperor today, the emperor is seen in Western-style military dress uniform, complete with epaulets and numerous frills; a formal hat in the style most stereotypically associated with Napoleon sits on a table next to the emperor, who sits in a Western-style chair and holding a sheathed saber. His hair is cut short and parted, and bears a thin mustache and beard.