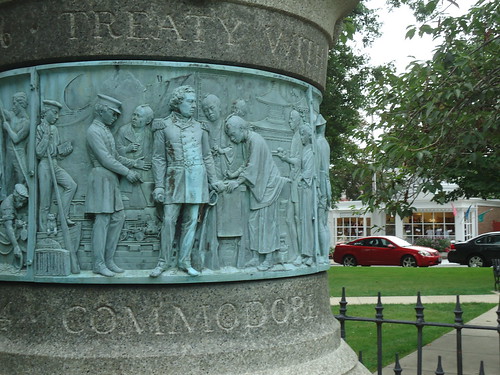 Scene on the base of bronze statue of Perry in Newport, RI.

Commodore Matthew Calbraith Perry was the leader of an American mission sent by President Millard Fillmore to Japan to pursue the establishment of formal trade relations between the United States and Japan. He visited Japan twice, in 1853 and 1854, stopping at the Ryûkyû Kingdom as well four times (on the way to and from Japan in 1853, and again the following year). The arrival of his ships, known as the "Black Ships" (kurofune), which led to the signing of the Harris Treaty several years later, opening several Japanese ports to Western commercial activity, are generally taken to mark the beginning of the Bakumatsu Period.

Perry has long been celebrated in both the American and Japanese popular imaginations for having "opened" Japan to the modern world and to commercial intercourse, ending Japan's long period of supposed isolation, with some accounts portraying the Edo period as a "dark ages," in which Japan was held back from advancing into modernity. Scholarship has, for decades, however, emphasized Edo period Japan as quite actively engaged in foreign interactions, albeit in a guarded, controlled, manner through maritime restrictions, and as a period of great economic development and cultural flourishing.

A replica of the flag flown by the USS Powhatan at Uraga in 1853, and by the USS Missouri during Japan's official surrender ceremony in 1945. While the original is held by the US Naval Museum at Annapolis, this replica is today displayed aboard the Missouri at Pearl Harbor.

"Prosperity to the Lew Chewans, and may they and the Americans always be friends." - Commodore Perry, at Shuri, June 6, 1853.

Perry and his fleet of four ships (the steamships Susquehanna and Mississippi, and the sailing ships Plymouth and Saratoga)[1] departed Norfolk, Virginia, on 1852/10/13 (Nov 24). Before arriving in Japan proper in July of 1853, they first called at Naha, the chief port of the Ryûkyû Kingdom, on May 26 (4/19), departing Ryûkyû more than a month later, on 5/26.

Perry was met aboard ship by the Ryukyuan royal regent, Sessei Ôzato Chôkyô, who attempted, unsuccessfully, to convince the Commodore to give up his intentions of entering Shuri castle. Makishi Chôchû, a high-ranking official in the royal government sent to serve as interpreter, further tried to refuse Perry and his men permission even to set foot on the island, but they did so anyway, over the protests of Makishi and the other Ryukyuan authorities. Makishi would continue to serve as interpreter and in a lead role otherwise throughout Perry's visits to Ryûkyû.[2] Bernard Bettelheim, a British missionary who had already been living on the island for several years, also imposed himself upon Perry as interpreter. A few days later, Perry's men took over a schoolhouse in Tomari, claiming it as their temporary residence on the island, while Perry himself led an exploration of some of the most nearby of the Ryukyu Islands.

On June 6 (4/30), Perry forced his way into Shuri Castle, but was denied audience with either the ten-year-old king or the queen mother. The same would occur the following year. These forced entrances into the palace were for Perry boastful and demonstrative moves, displays of his power, demonstrating to the Ryukyuans (and perhaps for his own enjoyment) that he possessed the power and authority to make such demands (such as entering the palace), and to see those demands met. Even so, his demand to meet with the king was never fulfilled, as the Ryukyuan authorities successfully stood to their insistence that the regent would be the highest ranking individual Perry would ever meet with.

He later claimed a portion of the Gokoku-ji complex where Bettelheim was living as pasture for the fleet's cattle, and then spent the remainder of June exploring the Ogasawara Islands, which he claimed for the United States before returning to Okinawa on June 30 (5/24) and departing Okinawa in earnest two days later.

He landed at Uraga near Edo for the first time on 6/3, shocking Japanese fishermen and the like who were the first to witness the smoke-belching "black ships" steaming into the bay. The shogunate took steps to mobilize local police, and warned the people of the possibility of war, sending much of the townspeople of Edo into a panic. The prices of rice and other commodities skyrocketed as people stocked up. Many fled the city in a hurry, while armorers, smiths, and the like, among others, began pumping out additional product to help arm the warrior class.[3]

Following his arrival, Perry soon afterwards met with Tokugawa officials, to whom he presented his formal credentials and formal communications from Pres. Millard Fillmore, and offered a number of gifts. These gifts, displays of Western/American technological superiority, included a 1/4-size steam locomotive with 370 yards of track, and telegraph equipment with three miles of lines.[4] A shogunate official was given a ride on this model train, which moved along the tracks at 18 miles per hour, and "was reported to be delighted at the ride."[5] While in mainland Japan, Perry's interpreters included Moriyama Einosuke, who had learned English from Ranald MacDonald, and John Manjiro. These documents, incidentally, used the term "emperor" to refer to the Tokugawa shogun; it was only at some point after this time that it became standard to refer to the tennô as the "Emperor" in English.[6] After delivering these letters, he departed Japan on 6/9, claiming he would return "in due course" to receive the emperor's reply.

Perry then returned to Okinawa, arriving at Naha on 6/20 (July 25), and requesting to bury Hugh Ellis, a crewman of the USS Mississippi who had died the previous day. Ellis was buried at the Tomari International Cemetery in Naha. Perry also requested to establish a coaling station on the island for American ships and was initially refused, but the Ryukyuans capitulated once Perry threatened to seize Shuri castle by force. The station which was built had a capacity for 500 tons of coal, but was emptied of coal once Perry found success in establishing relations with the shogunate; he expressed hopes at that time, however, that the building might still be maintained for American use.[7] Perry then departed Okinawa on 6/27 (August 1), and spent the next several months in Hong Kong, before returning to Okinawa in December, spending 11/15 (Dec 15) until 12/30 (Jan 28, 1854) exploring the various Ryûkyû Islands. 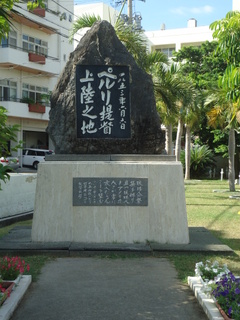 Perry returned to Naha on 12/22 (Jan 20, 1854), this time with a fleet of ten ships, including his flagship the USS Susquehanna, as well as the steamships Powhatan and Mississippi, and the sailing ships Plymouth, Saratoga, Macedonian, Lexington, Vandalia, Southampton, and Supply.[1] He stayed in Naha for only four days, during which time he forced his way into Shuri castle again, but again was refused audience with the king.

He then arrived at Edo Bay again in mainland Japan on 1/14 (Feb 11) with a fleet of seven ships.[8] The Convention of Kanagawa was signed on 3/3 (March 31), opening the ports of Hakodate and Shimoda to American trading ships, obligating the Japanese government to provide provisions and good treatment otherwise for American or European castaways throughout Japan, and arranging for the establishment of formal relations in the Western/modern style, with a permanent American consulate to be established shortly afterwards. Perry also asked the shogunate about opening Ryukyuan ports for trade, but was rebuffed, with the shogunate telling the commodore that Ryûkyû was "a very distant country, and the opening of its harbor cannot be discussed by us."[9]

In the meantime, in response to the recent arrivals of both Perry and a number of other Western ships, the shogunate ordered all bells in the country to be melted down and refashioned into cannon and rifles - with the exception of bells at head temples (honzan), those used for timekeeping, and those of great age and fame.

Perry sent the Vandalia, Southampton, and Macedonian to Hakodate in the 4th month of 1854, where they would spend 15 days surveying the harbor. Perry arrived at Hakodate himself on 4/21 aboard the Powhatan, arriving alongside the Mississippi, to see the site for himself.[10] He departed Hakodate on 5/8 and returned with all five ships to Shimoda.[11]

Perry returned to Naha for the final time on 6/7 (July 1), to find that in the intervening time, there had been several incidents between the local residents and American crewmen he had left behind. In the worst of these incidents, a crewman named William Board either raped a young Okinawan woman, or assaulted an old woman (accounts differ), and was then killed by an angry mob of local residents. He was buried in the Tomari International Cemetery alongside three of his crewmates who also died at various times during that year. A number of members of Perry's crew who died in mainland Japan are buried at Gyokusen-ji, in Shimoda.

This grievous incident aside, the Treaty of Amity between the United States and the Ryûkyû Kingdom was signed on 6/17 (July 11). In the Treaty, Ryûkyû agreed to provide wood and water to American ships calling at any Ryukyuan port, to allow Americans to move freely within Ryûkyû without being harassed or followed by government officials, to allow private trade to take place freely between Americans and Ryukyuans, and to lend aid to American ships and castaways.[12] Perry departed Ryûkyû for the final time on 6/23 (July 17), taking with him the missionary Bernard Bettelheim, and a number of significant "gifts" he had insisted one taking; these included a number of blocks of Okinawan limestone which he hoped to install into the Washington Monument, then under construction,[13] and a temple bell from Gokoku-ji, forged in 1465, which Perry then installed at Annapolis. This bell was then rung whenever Navy won a game against Army in football, up until 1987, when it was returned to Okinawa and replaced at Annapolis by a replica.

Commodore Perry arrived in New York on 11/25 (Jan 12, 1855). The Treaty of Amity between the US and Ryûkyû was ratified by Congress shortly afterward, and before the end of that month, Perry returned to Japan one final time, to present the ratified treaty to the Tokugawa shogunate. The following year, Perry presented his Narrative of the Expedition of an American Squadron to the China Seas and Japan to Congress.

Upon his death in 1858, Perry was buried in his family's plot at a cemetery in his hometown of Newport, Rhode Island. A bronze statue of Perry stands in Touro Park in Newport today, alongside a stone lantern donated by the government of Japan.

Japanese and Okinawan objects Perry brought back from Japan were among the earliest objects to enter the Smithsonian collection, and many remain there today.

His widow, Jane Perry, was visited in 1860 by members of the first Japanese embassy to the United States. August Belmont, a grandson of the commodore, became in 1907 one of the founding members of Japan Society in New York.

Sketches and daguerreotypes depicting scenes of the mission, produced by Eliphalet Brown Jr., remain today an oft-seen, or oft-cited, source of visual information about these events; journals or diaries by Perry and his men, alongside more official documents also serve as valuable historical documents about the experiences and actions of Perry and his crew.