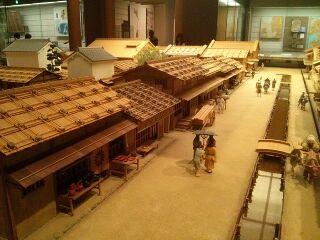 A section of a model of the Shijô-Muromachi area in Kyoto, as it might have appeared c. 1570-1580. National Museum of Japanese History. The chô might have included all the buildings on either side of the street from one intersection to the next, or some similar grouping.

The chô was a standard physical and administrative division in early modern cities. Often translated as "town ward," "district," or "neighborhood," chô often consisted of one section of a street, defined by gates at either end, and incorporated just those buildings which faced one another along that section of street. Each chô was administered as a unit, and may have had a single headman, as well as certain other officials - such as a barber (kamiyui) - who served within that chô.

Chô varied from one city to another, as well as within cities, in terms of their size, layout, organization, and administration, but were generally quite similar across the archipelago. The archetypal chô were those of central Kyoto, a layout and administrative unit which emerged out of the violence and chaos of the Ônin War, and of the Sengoku period more broadly, when fighting in the streets led each neighborhood of Kyoto to begin to have to fend for itself, erecting gates and other defenses. In Kyoto, as well as in other cities, a typical chô consisted of two rows of machiya (townhouses), facing one another along the street. The streets themselves ranged from around three to eighteen meters wide.[1] Each machiya typically served as both storefront and family residence, and extended deeply back from the street, covering a considerable area despite an unassuming frontage. Some machiya-sized lots, however, were sub-divided into smaller residences, perhaps as small as four and a half tatami mats (approx. 7.3 square meters). These places, which some scholars have called "tenements," served as homes for the many lower-class people who could not afford a full house. These people, known variously as shimojimo ("lowers" or "under[class]es"), karoki mono ("people to be taken lightly"), or by a number of other terms, worked a variety of jobs, and represented a large swath of the urban population excluded by the stereotypical image of the chônin (townsperson) as a wealthy merchant or professional artisan, and as someone engaged in "high" cultural pursuits and social circles.

Communal areas in the lots behind the homes/shops housed wells, communal toilets, and garbage pits.[1]

While the residents of a chô were likely in many cases quite closely knit early in the Edo period, by the end of the period, this had broken down considerably. Many people - particularly the middle- or upper-class merchants and artisans - enjoyed social lives which took them beyond their own chô, and accordingly it gradually became more common for any given chô to more regularly see visitors, i.e. strangers, from other chô.

Each chô had a headman or similar figure who collected taxes, oversaw peace and order within the chô, and represented the community to authorities one rung higher up the ladder. Chô frequently also had only one licensed barber per chô, officially recognized and authorized by the city government. As barbershops were a major gathering place for local neighborhood people, and since nearly everyone made use of the barber's services at one point or another, barbers came to serve the city administration by providing some degree of surveillance and security - in other words, by reporting on who came into the chô, and on gossip and goings-on the barber saw or heard about.