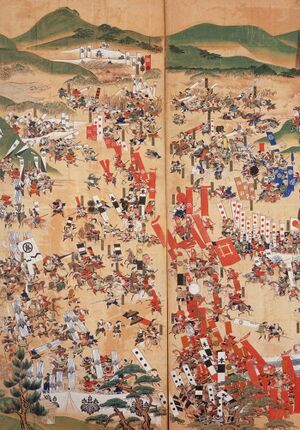 This battle saw the culmination of the Sekigahara Campaign and the complete defeat of the ‘Western Army’. The battle was fought around a small village called Sekigahara that sat astride a crossroads under the heights of Mt.'s Sasao, Matsuo, and Nangu. In retrospect a strategically important point, the choice of the field of battle had been inadvertant. Ishida Mitsunari had hoped to meet Ieyasu somewhere further east; Ieyasu's primary objective had been Sawayama castle. Ieyasu's hasty march west forced Mitsunari to offer Ieyasu a fight the latter was more then willing to accept. At the same time, the ground favored Mitsunari to a degree. Western army troops occupied the heights around Mt. Nangu and Matsuo, with Ishida himself positioned somewhat northwest of Sekigahara and flanked by Mt. Sasao. Ieyasu's men were deployed along the Nakasendo, with the vanguard facing Mitsunari, and were exposed to an attack in the flanks, especially by the western troops on Mt. Matsuo. Luckily for Ieyasu, those men were under the command of Kobayakawa Hideaki - who had already decided to betray his western compatriots. The fighting began in a rainy dawn, and the issue was initially very much in doubt. The forward Tokugawa units attacked and became heavily engaged with contingents under Ukita Hideie, Otani Yoshitsugu, and Konishi Yukinaga. No real advantage was being gained until the defection of Kobayakawa Hideaki around noon. Hideaki, who commanded one of the strongest Western contingents present, turned the tide in Ieyasu’s favor. Meanwhile, the 25,000 or so western troops arrayed on the slopes of Mt. Nangu under the Mori and Chosokabe were largely idle. Kikkawa Tsunie, commanding the vanguard, had himself decided not to fight Ieyasu, and his immobility forced those to his rear to do the same. Finally, the western forces began to break and a general rout ensued. By the end of the day's killing, Ishida Mistunari’s forces had scattered and as many as 60,000 heads would be taken. Tokugawa’s victory was owed in large part to Kobayakawa’s defection and the inactivity of the Mori contingents present. Ishida and Konishi Yukinaga were later captured and executed.