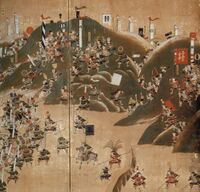 In an effort to break the developing stalemate at Komaki, Hideyoshi dispatched the Ikeda to move around the Tokugawa army and threaten Mikawa. Farmers warned Ieyasu of the Ikeda movements, and he hastily led an army out to intercept them. The battle opened with a single shot that killed Mori Nagayoshi and developed into a rout for the Ikeda. Hideyoshi led out an army when news of the defeat reached his headquarters, but Ieyasu elected to avoid contact and ultimatly returned to Komaki.