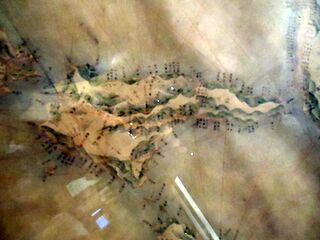 Awaji as depicted in an 1821 map by Inô Tadataka

An island province in the Inland Sea adjoining Harima province and Awa province in Shikoku. Now it is part of Hyôgo Prefecture.

The island of Awaji appears in the Nihon Shoki, as one of the first islands to be formed. It is formed of the placenta of Izanami, when she gives birth to Hiruko, the Leech Child; according to interpretations related to that tale, the etymology of the island's name is said to be related to the word haji ("shame" or "embarrassment"), or to a negative form of the verb au (to meet; awaji would thus mean "to not meet," or, to be unsatisfactory). However, it has also been suggested that the more historical (non-mythical) origins of the placename might derive from the two characters awa and ji meaning "millet place" (粟地). The characters used to write the island's name today (淡路) mean, roughly, "foam road" or "pale, fleeting road."[1]